It's hard to believe that Madison turned 1 year old last month! Seriously, where did that year go?? So what is going on in Maddie's life? She is quite the character and definitely has her own opinion on things already.
1. She started walking about 3 months ago and is almost at a run now.
2. Her first word was Pop Pop, and she says Momma a lot and Da, which is good because she used to say Mike instead of Da.
3. She has 8 teeth, 4 on top and 4 on the bottom.
4. When she turned 1 year we figured it was time to cut the 2am bottle and were prepared for quite a battle for a few nights. Surprisingly, she cried for about 5-10 minutes the first night and that was it. She still wakes occasionally because of a wet diaper but for the most part she sleeps from about 7:30pm until 6:30am. We were still planning on giving her the before bed bottle, but within the first 2 nights she weaned herself from that bottle as well! I was so proud of her.
5. This week she just learned where her nose is...so if you ask her "where's your nose?" she points to it...ok it's more really pointing under her nose around her upper lip..but i figure it's close enough LOL.
Some of her favorites:
- broccoli! Maddie loves her veggies and fruit..it was so funny the other night we had tacos and out of all the food on her plate, the only thing she wanted was tomatoes!
- books! Madison LOVES to look at books. Her old favorite was Goodnight Gorilla, literally we'd read it 3 times in a row atleast twice a day. Now she is enjoying her lift the flaps and "feelie" books.
- pictures! She loves to look at pictures of people, especially if she is in the picture. If there is a picture frame in her reach she will pick it up, smile at it and kiss the picture and then carry it around for a bit.
- animals! Maddie goes crazy for dogs, cats, birds. For her birthday she got a little cow and she loves to make me say Moooooo. She also knows her moo cow...one day I asked her where her moo cow was and she scanned the room, picked it up and ran it over to me..she's a smart cookie! At our new place, we are steps away from a river and there are swans and ducks that we see every once in awhile, so we bring them bread. Madison enjoys feeding them (and herself). One day we were feeding the ducks and they started quacking at her, omg she was in heaven. I can't wait to take her to Animal Kingdom when we go in September, I forsee us going on multiple safari rides and standing for long times staring at the gorillas and tigers.
- dancing and music! Whenever Maddie hears music she starts bopping around and her face lights up.
- balloons! this obsession started on her birthday and now she has a "balloon radar". Whenever we pass a balloon, she reaches out for it and says "ah!" luckily no tantrums have resulted yet :)

Anyway, enjoy some pictures below! By the way, yes that is a potty Madison is sitting on in the last picture, no we are not actively training her...I'm just trying to get her used to the idea of sitting on the potty and what we do in the bathroom, etc. I just happened to see the pink frog potty at the store the other day and Maddie liked it, so I figured I would pick it up to be prepared. Plus it gives her something to do in the bathroom because she HAS to follow me in and so the potty keeps her out of trouble. 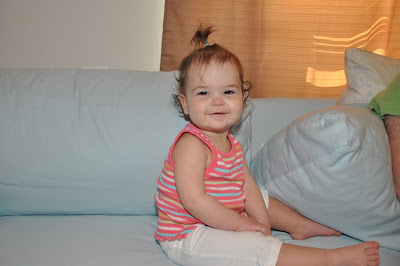 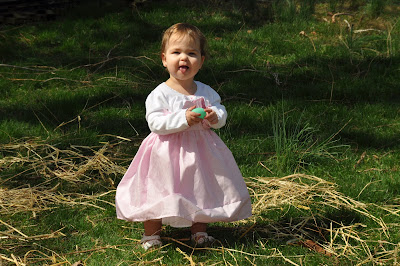 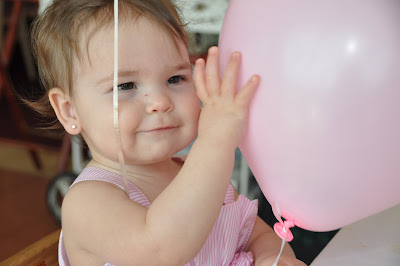 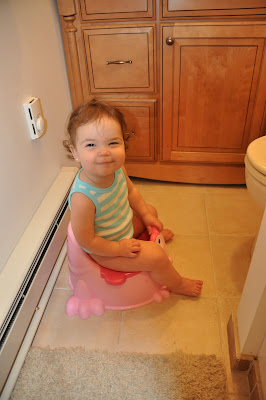 I just thought I would take a look to see if you might have updated the blog. OMG I almost had a heart attack when I saw that you did update. It looks great. Thanks for the update. I love the 1st & 4th photos, Too cute.