Aidan is doing so much better now than he was last night. After his surgery his heart rate was around hanging in the 180's and high 170's with his blood pressures being around 110/70. They kept giving him more Morphine and Fentynal and Midazolam. When we left him around 8:30 PM he was around 160's with his blood pressure at 100/68. Around midnight he had a fever of 101.3, but after the fever broke his heart rate dropped down to the 140's and its been staying there, going down to the 130's occasionally all morning. They also moved his bp cuff from his leg(which is notoriously a higher reading for people) to his left arm and his pressures have been normal with his most recent one at 73/47. He got another fever around 8:00 AM, so they are running some antibiotics through him just to be on the safe side. They also lowered his Bumex drip(that helps him shed excess water) because he had over 200 in and diuresed over 400, so they think they are finally starting to dry him out. He looks so much better after this surgery than he did from his stage 1
I can't wait for him to start waking up! Because of his tight stretch I think they will begin taking him off the Vecuronium on either Sunday or Monday (hopefully Sunday though!) 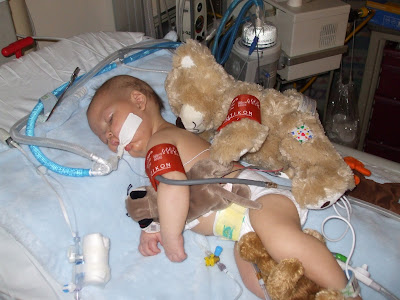 Aidan and Champ getting their blood pressure checked

were so happy to here that aiden made it through we wish him well in his recovery . i hope YOU guys can strart to put this behind u. much love Frannie and anthony

Yeah!! We are so happy that Aidan is doing well and his surgery was a success. We love you and miss you. Love Alex, Ria & Baby Alex.
PS. Baby Alex looks at his cousin Aidan on the fridge and smiles away:)

Cutest picture ever :) He looks so long! That bear is something that will always mean something to all of you :)
Shan