Remember how I said yesterday that I didn't think Aidan would get any new straws, well was I ever wrong! Aidan has grown 1 whole centimeter in 24 hours! His entire gap was 4.3 cm, so he grew 1/4 of the gap in one night! Dr. Foker and Kirsti were looking at his x-rays and have estimated that he his gap is down to 2cm.
Aidan's left lung is also looking really really good at this point, he is back to where his lungs were before surgery. The respiratory therapist today said that they were super clear and his left lung was no longer "junky" and the same xray films show how much better his lungs look from the inside as well.
In some not so good news, Aidan's stomach pH has been really low(it's at 1), which is very acidic(normal pH levels are between 5 and 7). The docs aren't too concerned right now b/c there is no bleeding or anything, so we are just going to ride it out and hopefully it will go back up once he starts getting some food back in his system. 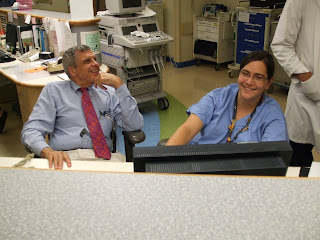