I got to the hospital pretty early today because the new round of residents started this morning so I didn't want to miss Rounds. Aidan is doing really well and he is a little over 6 kilograms (13 pounds). There was a mix-up this morning with his formula, they gave him Soy instead of Regular formula but luckily I caught it and he only got it for a few hours. I talked to Kirsti and she said that Dr. Deitz is out this week but she was trying to get Aidan on the schedule for either today or tomorrow for an esophagram (whenever he has an opening in his day) and hopefully Thursday he will have his Stage II. I also asked her about the G/J tube and she said if it isn't leaking formula then she isn't worried and not interested in putting a different tube in. The residents were thinking they might want to go down a bit on his Vec (i knew this would be a bad idea) So they said if his Vec Holiday lasted more than 2 hours to let them know and they would decrease it. Aidan started moving at around 50 minutes with the nurse seeing him move at around 55 minutes, so thankfully that means he can stay where he is.
In sad news, Aidan is losing his hair, alot of it, and in patches :(Aidan's Primary Nurse, Christina, said yesterday that she thinks he probably has a super fast metabolism, which is why they need to constantly increase his doses and that the TPN isn't enough for him. It could also explain the hair loss. It's kind of like when a person is anorexic and their hair begins falling out because they don't get enough nutrition. She said be prepared to be eaten out of house and home when he turns 15 LOL 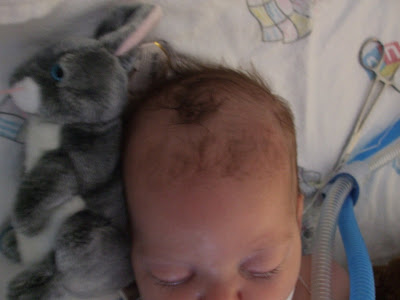 Hope everything goes well and they can do Aidan's Stage II this week. We will be there before you know it and I hope he is awake then (no pressure though). Can't wait to see you guys. Love, Barb