Well not much has changed since yesterday with Aidan. He is a little puffy so they resumed his diuretics. While we were there tonight, his nurse Christina, told me that he had been moving a bit and trying to open his eyes. She had already given him his PRN dose of Vecuronium so she got the resident to come in and they gave him a larger dose of Vec to calm him down. Then while I was sitting with him he began moving so yet another bump. The problem with having him "down" for so long is that his body starts building up immunity to the drugs so they have to keep increasing it slowly.
I was talking with some of the nurses over on 5A where Aidan was originally, telling them how his surgery went yesterday and ran into Dr. DeGraft-Johnson, one of the fellows on Dr. Foker's team. We began discussing Aidan and I was trying to get a new surgery date out of him. He said that what would be ideal would be to go in on the later end of next week so that they have lots of extra esophagus to work with. It's hard having him down for this long, but it would be best for Aidan, so I wouldn't be surprised if they wait a little longer than we all would like.
Remember to vote on our poll! 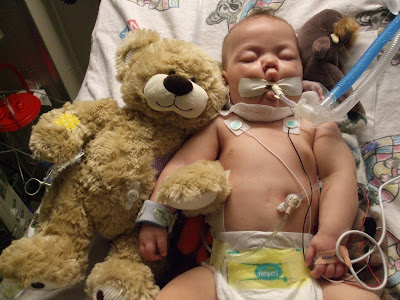 Awww, that is such a sweet picture of Aidan and Champ. Bless his heart. You have a wonderful, precious baby who will grow up whole and healthy. May the Lord give you peace and patience through this ordeal. Thank you for all the updates, they help us who are keeping up with Aidan's progress. You do such a good job with the entries. Judy

how are you guys holding up ? as always u and aidens are in my thoughts and prays frannie

aidan looks like me when i was on steriods. aww. if you guys have an address yet, lemme know what it is. :) //kris