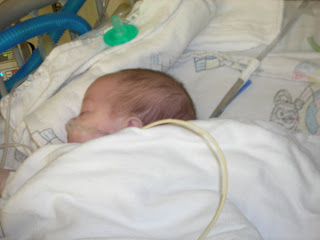 Aidan just getting into the recovery room after his endoscopy. 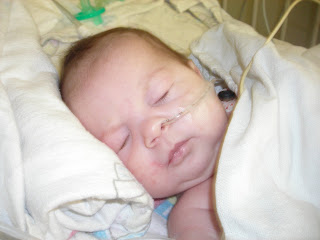 Aidan waiting for the anesthia to wear off. 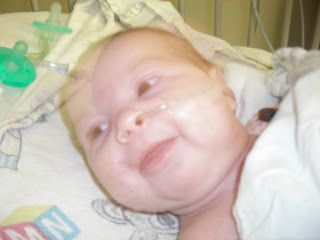 Aidan after he woke up and was given some infant tylenol.
Aidan had some more testing done today. He had an endoscopy of his upper and lower GI tracts. The doctor saw that there was a pretty good size proximal (top) esophagus and a distal (bottom) esophagus of atleast 1 cm, but probably closer to 2 cms, which is great! He had to be intubated and extubated so he had a really dry throat and seemed to be in a bit of pain, so the nurse gave him some infant tylenol through his g-tube. The doctor also replaced his g-tube with a bigger size, he went from a 12 french to a 14 french. Unfortunately, it seems that its a bit big so everytime that he gets fed he leaks some food out. The doctor said that it was normal until the stomach and skin wrap closer to the g-tube and isn't worried about it, but they now have him on a continuous feed so that the leaking isn't out of control like it was earlier when he was getting the full 80mL's in 20 minutes.
After he recovered a bit from the endoscopy he was sent down for a renal ultrasound, because while Aidan was at CHOP they noted that his kidneys were a bit dialated, so they wanted to follow up and check to see if they were still dialated. We haven't heard about the findings but i'm sure that it will be fine (boys tend to hold their urine in the kidneys a bit longer than girls do).
When the doctors (regular Pediatric doctors) came through for Rounds they thought that since Dr. Foker won't be doing Aidan's surgery until after he gets back from overseas, that they didn't see any reason as to why we wouldn't be able to be released from the hospital, staying in the area until after Dr. Foker gets back since Aidan is so stable and hasn't had any problems and their testing is pretty much done. That would be soooooooo absolutely amazing!!!! So tomorrow morning we are going to talk with Dr. Foker's CRNP to see how her and Dr. Foker feel about that, so keep your fingers crossed for us!