Today felt like the day we have been waiting for since Aidan was born. He was discharged from the hospital around 100pm. 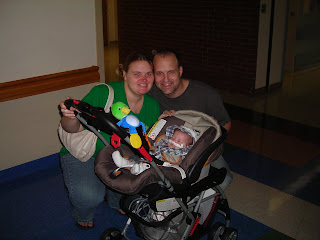 Family Photo as we leave the hospital

Aidan loves his car seat-as soon as he is place into it, he is out like a light! So yet again he slept through his whole outdoor experience . When we got into the Ronald's entryway Aidan opened his eyes and they lit up like a Christmas tree! It was such a sensory overload for his-he was looking around at everything and was quite intrigued by the elevator. After getting into the room I went to take him out of the car seat and relax but he didn't want any of that - so he took a tiny nap in the car seat on the bed. 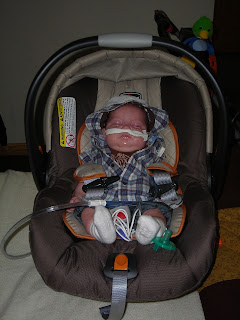 Aidan Passed out in his car seat.

Aidan enjoyed looking around the room while he was awake and watching TV with Daddy. Before he left the hospital the docs increased his feeds to 100 mL every 3 hours and he has become quite ravenous - crying like crazy to set the alarms off because he had a slightly wet diaper & was hungry. Mind you he still had 15 minutes before the next feed was due. We are hoping that he sleeps as well tonight as he did last night for us at the hospital. He went to sleep at around 11pm last night and only woke up for 30 minutes during the night and slept until 7am. Not bad for a 10 week old! :-)